Spell to Remove a Curse 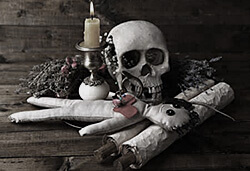 Has a hex been put upon you? Have you been cursed?

Are you under the power of a curse or hex?

Does it sometimes feel like everybody is out to get you? Are you the unluckiest person in the world? Does it feel like no matter what you do things never work out? Are you plagued by feelings of anxiety or fear?

Or perhaps you've angered a gypsy woman, a witch, a voodoo priest, or another caster? Maybe someone told you that they've put a hex on your life? Or threatened to curse you if you don't pay them some money? You wouldn't be the first to tell me that.

Or have your parents and siblings been beset by problems for as long as you can remember? Do you come from a broken home? Perhaps you're an orphan? Is it possible that you could be the victim of a family curse? These things exist.

Sometimes - if things are going bad - especially if they've been going on for a while and it's affecting many areas of your life - it could be the sign that you are under a curse.

But it's okay. There's no need to panic.

What is a curse and can a curse be removed?

Curses are nothing more than dark malevolent spirits, that find their way into a persons life, and - depending on the type of spirit - wreak havoc.

In a sense, they're a bit like a virus - only unlike a physical virus, or a computer virus, they exist on the spiritual plane - which means they're out of reach for most people.

If you feel that you may have been cursed - even if you can't pinpoint exactly how or who by - I can definitely help.

No matter what evil dark magic has been done to you, I can remove all curses, send the curse back to whence it came, begin the healing process to repair what damage has been done, and most important of all, protect you from further attacks.

We can do this together, today - and nobody has to know that it is I who has helped you.

Let me help you get your life back on track.

What if you're not sure if you've been cursed?

Sometimes a client comes to me and isn't sure whether they're under a curse, or whether they're just genuinely unlucky. No one wants to spend money having a curse removed just to find out that it wasn't necessary.

If I discover that there isn't a curse in place, I will buy a spell of good fortune.

Either way your life will get better from here on.

Is there anyone who this Curse Removal Spell wouldn't work on?

Some people have been under a curse so long that they know no other way of living. And as soon as the curse is lifted they start looking around for that familiar darkness, that despair, that pain. Trying desperately to get it back.

But that's NOT you. I know You want to be well.

Others pay me to remove the curse, and then ignore everything else I tell them to do; a little list of simple tasks to clear out all that residual curse crap. It's like they've spent all that time with an unwanted 'guest' in their home, but now that they have their home back, they can't find five minutes to throw out all the needles and bottles and shit that's still hanging about reminding them of the bad times. I mean... wtf?

But that's NOT you. I know You want to be well.

It's not the curse. It's life!

You want to be well.

Why choose me to remove your Black Magic Curse?

I am Raven. A genuine Black Magic Witch, who specializes in powerful ancient spells, curses, and - more importantly - curse removal.

I perform a variety of rituals that have been proven to work time and again, and that consistently channel powerful forces to change people's lives for the better.

The forces at work behind what I do are not easily understood by the average person, but the consistent results and sheer number of repeat requests for my services are proof enough.

I, perform all the rituals myself, but unfortunately the number of spells and curse removals that I can perform is limited due to the intensity of the ritual and the time spent personalizing it for each person. It is best that you act now, or unfortunately you may end up stuck on the waiting list, while the curse goes unstopped.

For some, my services might be expensive...they are indeed among the highest on the internet. But there's a good reason for this. The spells that will be cast are powerful, intense, and extremely effective, and get results. Simply put - when a person of my knowledge and ability accepts your request for a spell or curse, you are in for a life changing experience.

Are you ready to have the curse lifted from your life?

Now that we’ve established that, let me help you remove that curse. Click the link below and be sure to tell me why you think you are cursed, and how long this has been going on.