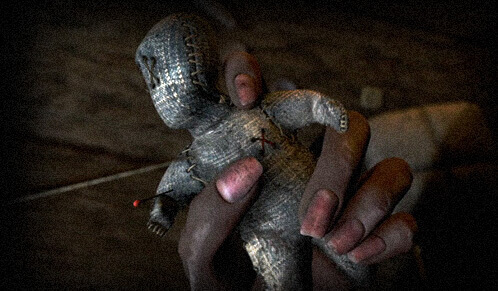 What’s the difference between Voodoo Spells and Black Magic Spells?

I get asked all sorts of questions about Black Magic, spells, what I do and how it works, but surprisingly, one question that comes up time and time again, is this:

Which is more powerful? A Voodoo Spell or a Black Magic Spell?’

And the answer is…

Complicated. And yet, also simple.

To fully answer the question, we really need to understand what Voodoo actually is.

What exactly is Voodoo?

Voodoo is actually a religion. In Haiti it’s huge!

Like other religions there is a God, but Voodoo followers can’t talk to him directly. They have to talk to him via the Voodoo forces & spirits known as The Loa.

The Loa are pretty powerful, and depending on who’s asking, they’re sometimes able to grant requests.

Does Voodoo Magic involve animal sacrifice and other scary stuff?

To keep The Loa happy, ‘Thank You’ rituals and ceremonies can sometimes involve animal sacrifice, but they really don’t have to. If you were a spirit would you want to see an innocent animal murdered in front of you? What would be the point?

Those images of Voodoo Priests and Priestesses being ‘possessed’ aren’t made up – sometimes, it does happen. The Loa are invited to enter the body of the Voodoo Priest so that they can communicate with us mere mortals. It is considered a real honour to be chosen.

Most times though a Voodoo Priest or Priestess communicates will The Loa (the Voodoo forces and spirits) through ritual and meditation, thoughts and feelings.

This is much the same way that I work

When I communicate with the Spirits I see them, and I hear them - but they don’t take over my body and start me dancing around the room. It’s far more relaxing than that. I do the equivalent of having coffee and cake with the Spirit world.

Voodoo Spells, Black Magic and Me.

If you’ve read my ‘about me’ page you’ll know that I have identified with the term ‘witch’ since my teens. Magick and Spells have come naturally to me for as long as I can remember.

But back in my twenties I went off in search of answers to questions I didn’t even know I had. Voodoo had always intrigued me so I looked for a Voodoo Priestess near me. I was in New York so there was bound to be one close by, right? Nope.

Huh. Maybe Voodoo is more of a man thing? I googled ‘Voodoo Priest near me.’ Nothing.

Clearly Voodoo wasn’t going to come to me. But I was too curious to let it go. Clearly, a bit of travelling was in order.

I cast a Fortune Spell, pumped it’s energy up every day and within a few months I was on my way to meet a real life Haitian Voodoo Priest – well, if you’re going to learn, you want to learn from the best, right?

He was so lovely, and he kindly took me under his wing. You can request Jean Emmanuel's contact details directly from me.

He taught me all about the different Spirits; The Loa.

He taught me that they aren’t like angels - they are Spirits with Attitude! Each has their own personality, likes and dislikes. They have their own symbols and ways in which they like to be ‘thanked.’ For example, to make sure you don’t get seasick or run aground on the cruise you would work with the Loa Agwe. The only way to call him during a Voodoo Ritual is with a conch shell, and even then you must make sure you have plenty of wet sponges and towels around to protect Agwe from the heat when he leaves his watery habitat. And that’s just the beginning……

After many months of tutelage (which totally blew my mind) I finally had my answer. I knew the difference between Voodoo Spells and Black Magic Spells!

Answer: Next to nothing!

There is virtually no difference at all. Voodoo Priests and Priestesses call upon Voodoo forces (The Loa), whereas I call upon The Spirits. But in reality, they’re the same guys.

Voodoo Spells might be cast using a different set of rituals. They might be worded differently and use different items to represent people, or their hopes and dreams - but at the end of the day they have the SAME intent as Black Magic Spells.

Voodoo and Witchcraft are just different perspectives of the same thing.

Asking which one is more powerful, or better, or more likely to work, is like asking someone if watercolours or oil paint are better – in reality it’s the person holding the paint brush that really counts. Both can be used to create a beautiful landscape.

Should you pick Black Magic or Voodoo? Does it matter?

The power behind a spell comes from the Intention and actions that follow. Firstly, the person who casts the spell has to be doing it with the very best intentions. They have to want the same level of success as if they were casting it for themselves. Secondly the person who has requested the spell has to follow the instructions laid out by the spell caster. That may be to walk away and let the spell get on with everything on it’s own, or do something that will ramp up the power.

If these steps are followed a spell will be powerful regardless of how it was cast. Intent is always the basis of power and success regardless of whether it is a Voodoo Spell or Black Magic Spell.

So now that you know all that… what would you like me to do for you?